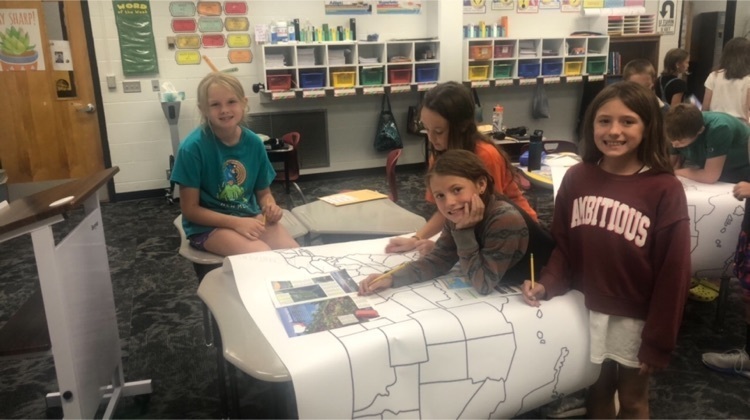 This week the new highschool librarian aide, Tasha Hamil, kicked off a new reading challenge. The Sequoyah Book Award is an award that honors an author who wrote a high-quality book that kids in Oklahoma love. The award is voted on by young readers in Oklahoma. Sequoyah Cherooke for "Lame One" was the son of a Cherokee mother and a white trader father, who was also known by his English name, George Guess. The Oklahoma Library Association (OLA) honors Sequoyah for his unique achievement in creating the Cherokee alphabet. In April 1959, the first Sequoyah Award was given.  That makes this award the third oldest in the nation.

Mrs. Hamil invited students 3rd-9th grade to a movie theater style showing of the book trailers that are nominated for the Sequoyah Award.  Complete with popcorn, donated by Arnett-Enid New Holland,  students were able to watch the book trailers in the auditorium.

Pastries with Parents hosted by the Arnett S.W.A.T. team will be held September 19th in the cafeteria from 7:40-8:15 am, for pre-k-6th graders and their parents.

Ms. Landers' fourth graders have been working diligently in Social Studies.  They have been learning about landmarks in the United States.  Ms. Landers printed giant maps and the students are using technology to find pictures of landmarks for each state to fill in their maps.

New staff spotlight: Jacey Dauphin is the new head softball coach at Arnett and is currently in her eleventh year of teaching and coaching. She is also teaching Senior Leadership, online Acellus classes, and PK-4th grade PE at Arnett this year. She is so excited to be here and has had a fun, busy, and exciting start to the new school year!

Jacey is originally from Arkansas City, Kansas, where she grew up and attended school. After graduating from high school in 2007, she attended the University of Arkansas on a full ride softball scholarship. Soon after, however, God sent her home for reasons she wasn't aware of at the time. She attended Cowley College in Ark City, where she was an All-American pitcher and finished the season third in the nation in 2009. In September of that year, her brother, Tyler, who was a Sniper with the 82nd Airborne Division of the Army, was killed in action in Afghanistan. It was soon after then, she realized, why God had led her home.

Jacey continued her educational and softball career, as well as obtaining a rodeo scholarship, at Northwestern Oklahoma State University. She graduated from NWOSU in 2012 with a degree in Health and Sports Science Education. From there, her career in teaching and coaching began. She thoroughly enjoys working with today's youth, in an attempt to pass on the knowledge, skill and passion for not only the game, but life itself, that she was afforded through the game of softball.

Coach Dauphin, her husband, Marc, and their two children, Easton (5) and Oaklee (3), live just south of Woodward. They enjoy hunting, fishing, playing ball and riding horses in their spare time, which is hard to come by this time of year. They stay pretty busy with school, coaching and umpiring. They are very excited to be new members of the Wildcat family and look forward to a great year!

Students gathered in the auditorium to enjoy popcorn and books!